MEYTEC were amongst the project partners at the official start of the new EU research project EmerEEG that took place in Cardiff (Wales,UK) at the beginning of January 2014. Smartbrain the leading partner in the project, are based in Oslo (Norway) and it was on the request of their CEO Haldor Sjaaheim the project leader, that MEYTEC should participate in EmerEEG. In the context of the research project the new EEG system will be developed as a prototype to be primarily used for diagnostics of craniocerebral trauma (CCT). The innovation is a specially developed EEG hood for fast head application using modern technological methods. The European Union is supporting this this innovation in response to a similar invention in the USA. MEYTEC will embed the invented solution in their telemedical application for emergency needs. The project is financed according to the new financing scheme of the EU. MEYTEC doesn’t receive any funding, but it will invest itself in the future-oriented project. If the research results from UK, Norway and Latvia are successful, MEYTEC receives the marketing rights for the EmerEEG solution in telemedical applications.
– More information: www.emereeg.com 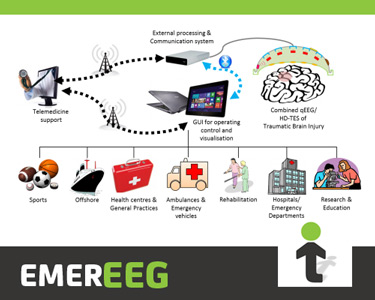