The project „Akutneurologische Versorgung in Nordost-Deutschland mit telemedizinischer Unterstützung“ (Abbreviation: ANNOTeM),  funded by the Innovation Fund, was officially launched on 10th of May in the venue of the Kaiser-Friedrich-Stiftung, Berlin. The welcome speech was delivered by the department head of the Charité teaching hospital, Prof. Dr. Axel Radlach-Pries as well as by the Health Care Minister of the Federal State of Brandenburg – Diana Golze. The project coordinator Prof. Dr. Heinrich Audebert – Head of the Neurological Department at the Charité, Campus Benjamin Franklin – explained the main objectives of the project. This was supported by a demonstration of the telemedicine solution at the event venue. The auditorium in Berlin was connected with the partner organization located in Bergen at the Rügen Island. Dr. Angermaier from the neurological Teaching Hospital in Bergen and Dr. Kinze from the neurological emergency hospital in Berlin performed a model teleconsultation to the assembled guests. 11 hospitals from the Federal States of Mecklenburg-Western Pomerania and Brandenburg will be involved step-by-step in a large tele-stroke-network with the central expertise in the Charité, Greifswald und UKB Berlin. Additionally to the telemedicine based stroke services the focus of the ANNOTeM project is also the development of new conceptual health care models for epilepsy and meningitis supported by telemedicine. 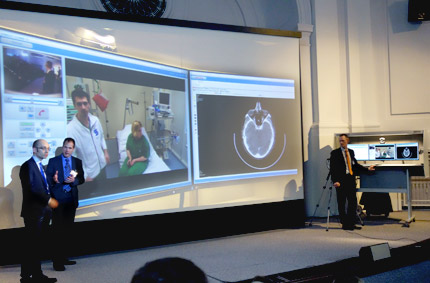 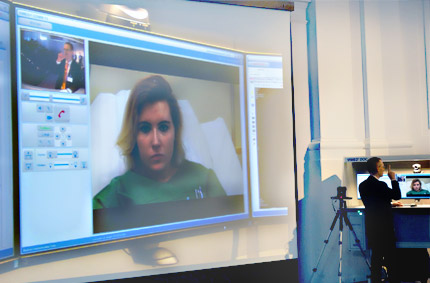 Opening ceremony of the ANNOTeM project funded by Innovation Fund